Super talented and beautifully glam electronic singer Andi Fraggs, first achieved international success in 2010, as a featured artist in Japan, America and Russia.  Andi has had huge success with his music used on the TV show ‘Entourage’ ‘ITV Monaco grand prix’ and several UK TV adverts and compilations. Public Description caught up with Andi to see what is next in store.

Elle: How/why did you first get into the music industry?

Andi: Music has always been my passion, in fact without music I don’t think I would be here today.  When I first came to London, I made an album with quite a well known producer, but by the end of the recording for the album we had several disagreements and things weren’t going in the direction which I wanted my career to go in.  I decided to make my own album instead, so I spent the next few years recording my first album ‘Always First’, which was released on my own record label last year and I’m pleased to say was really well received.  I released six singles from the album over a year and a half and each of them was successful in their own way, which was great!  I also toured the album three times around the UK, supporting some of my favourite artists along the way including Toyah, Hazel O’Connor and The Humans.

Elle: Where do you get your inspiration from?

Andi: I’m inspired by things that happen in my life and other people’s lives.  I do seem to be more inspired by the bad things that happen, so a lot of my songs are lyrically deep.  Some of my recent song subjects are about; Being abused by gangs because of being gay, a friend who has HIV and wants to end his life, the enduring hypocrisy of world governments, abuse in a relationship, a friend who committed suicide and many more of my own personal issues… So I don’t hide my feelings in any way!  There are some happier subjects on my next album.  A song which I’ve written with a great producer called Massimo Paramour called ‘It’s A Celebration’, a song which I wrote about survival called ‘Life Follows You’, ‘Only Love’ which is about forgiveness and acceptance being the key to enjoying your life and ‘Beautiful Feeling’, which is about anything that gives you a beautiful feeling!

Elle: You have had success in Japan, America and Russia – can you tell us how this all evolved?

Andi: As well as my own singles, of which ‘Reality’ especially was played on mainstream radio in Japan, I’ve collaborated on several releases with other artists and had my music featured on several successful compilation albums.  In France, my single ‘The Way I Feel’ was featured on a special compilation called ‘the best of MIDEM’, which is a very popular music festival there.  My first single, Fashion (feat Andi Fraggs), featured on TV around the world including HBO’s ‘Entourage’ in the USA and various shows and adverts here in the UK.  My AA Side single ‘Erocktion’ was played a lot in the European clubs and ‘Beautiful Feeling’ has been well received pretty much everywhere.  My latest single ‘If It’s Wrong’ had 80,000 views on youtube in just one day, which for a self released artist is great.  The internet is such an amazing vehicle for getting your music out there to a world wide platform.  I was recently very disappointed to learn that from one illegal file-sharing website alone my music has been downloaded over 20,000 times.  If that many people had bought my last single, it would have paid for my new album.  The internet is a double edged sword in that way.

Elle: I was lucky to catch your performance at this years London Pride. You sounded and looked amazing. Was this your first Pride performance?

Andi: Ah – thank you!!  I had a great day and the crowd were amazing, both on the Trafalgar Square stage and Soho stage.  I always support prides around the UK and have performed at many over the past few years.  It was my first main stage performance at Pride London, although I performed for Pride London in 2011 in Soho and was originally supposed to be performing on both stages last year, before everything got scaled back with World Pride at the last minute.  Personally, I love supporting Prides, but especially smaller prides around the UK where the meaning of Pride really makes a difference.  If being LGBTQI+ makes you feel alone in your home town every day, then to feel visible and part of a community on pride day means a lot and I love being part of that.

Elle: Is there any one specific that you would like to collaborate with musically?

Andi: Madonna, of course!  I would very much like to collaborate with a producer called Marius De Vries, as I love his work and sound, which is very spiritual.  I would like to record a duet with Jimmy Somerville, as he has such an amazing voice and when our voices are together, it sounds great.  I often cover one of his songs, ‘Why?’, in my live shows.  I hope to continue to work with Massimo Paramour in the future, as he is a great musician in every respect.  Not only does he write great dance tracks, he is also a brilliant pianist and he joins me onstage sometimes at special performances, which is always a thrill.  I currently have a few people in the pipeline for future collaborations, which would be very exciting if they happen.  Watch this space… 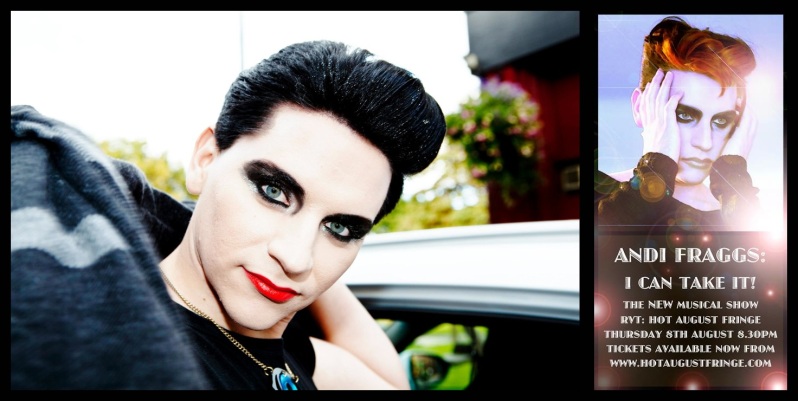 Elle: What’s next for yourself, Andi?

Andi: On Thursday 8th August at 8pm, I’m performing a very special self written and produced musical called ‘I Can Take It’, as part of the RVT Hot August Fringe in Vauxhall.  The show is a collaboration between myself and my creative partner Nick and it will feature new videos for every song, new costumes and also Massimo Paramour will be joining me on piano.  It’s an autobiographical show, which looks in depth at my struggle with abuse and how I’ve overcome many things to be here today.  It’s a very personal subject matter, which I think everyone can relate to.  After that, I will soon be releasing my, as yet unnamed, self produced album which I’ve spent the past year recording, mixing and now mastering.  I’m currently in talks with several record companies about that album, so if the right deal comes along I may be releasing it through them.  If not, I will release it myself.  I really can’t wait.  I also hope to tour again and currently discussing that with several well known artists.  I’m also promoting human rights at every opportunity at the moment and will be doing a lot of work with regards to that.  It’s looking to be a very busy time for the rest of the year – which is great!