Dystopian Dream is the edge between illusion and reality, which I guess is what life and death feels like to me.

In Nitin Sawhney’s own words, he is a composer, producer, and molecular accident. In my words, Nitin is a humble, intuitive, and meticulous genius.

Nitin’s love and possibly, obsession with music, began at the tender age of 5 years old when he trained initially as a classical pianist. He would then go onto learn jazz piano, guitar, flamenco guitar, and Indian classical percussion. The relationship Nitin had with music would also be a form of escapism and a way of soul-searching for Nitin.

Using music as a translation for Nitin thoughts and emotions has meant that each studio album created has been a cathartic release. Dystopian dream is no different. In this interview with Nitin, I get to find out in his own words, what his latest album represents to him and what keeps the multi-talented workaholic awake at night. 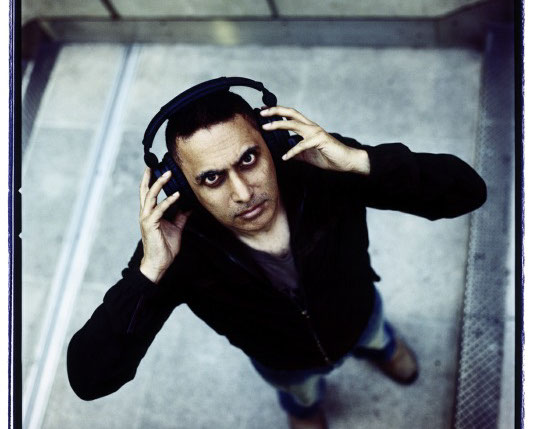 What does Dystopian Dream represent to you?

“This album started with my dads passing a couple of years ago, which I found really difficult to deal with. I was trying to find a way of expressing everything I was feeling at the time.”

“I have always been into looking at different ways of looking at the universe, and at looking at life and death.”

“Some of the ways at looking at the universe, is to do with an interest in Eastern spirituality and Hindu philosophy and some is to do with how I look at physics and what happens to particles. All kinds of things to do with quantum physics interest me, and I kind of think that when someone passes away that maybe they slip into another universe.”

“There is this concept in quantum theory around the multiverse. That the universe is multi layered and that our universe is not the only one, but that there are many universes that exist parallel to each other. That is also in Hinduism, God is depicted with many arms and each of those arms represents perhaps a different reality. So I was just playing with those ideas in my head.”

“I was there when my dad passed away and I felt I didn’t know where he had gone. That was the issue I had. I thought ‘He can’t have just gone?’ It was a kind of internal and external struggle. So what Dystopian Dream is, is the feeling of being on the edge between illusion and reality, which I guess is what life and death feels like to me.”

“Over the last few years I have been lingering on the edge in my head of this reality, and wherever my dad went, which I couldn’t really let go of very easily.”

With your dads passing, has this made you feel more religious?

“No. I feel that religion quite often, is when a religion becomes corrupted or distorted by people’s egos, that try to control other people for their own reasons.”

“I never really related to religion, and never related to this idea of belonging to a collective way of thinking about spirituality.”

“Spirituality is a very personal thing to me and it’s very individual. I do think there are a lot of good things that come from religion, but which should also come naturally. Trying to be selfless, conducting your life with integrity and not being an arsehole to people. That should be a natural function of how you lead your life. It shouldn’t be that you need some kind of other eternal motivation, and it shouldn’t be that it comes from people’s needs to control you or tell you how to think and feel.”

Do you feel you got some of the answers you were looking for?

“It’s a difficult thing. I once said Dystopian Dream feels like the light down an infinite tunnel, and that’s what it feels like to me. You don’t ever really get the answers until you die, but then, maybe even then you don’t. An album for me is a cathartic experience and an artistic expression. So it’s about exorcising demons or feelings, that you at times feel are difficult to cope with or are therapeutic, but at the same time having an awareness that you want to organise your chaotic feelings into something that feels musical. I use the grammar of music to try and create something that I feel is moving or powerful or emotional.”

Collaborations on the album

“It’s definitely great having a name like Joss Stone, but also good having some of the young up and coming artists on this album, like J’Danna. You can hear with J’Danna that she has got a really amazing voice and is phenomenally talented. She has a touch of Macy Gray about her. You can hear that huskiness which I really like.”

“Eva Stone is a really talented young artist. She has a very similar tone to Eva Cassidy and also Joss Stone. It’s an amazing voice.”

“I seem to meet these artists at a very early stage of their career. All these artists that I come across, go on to do really well. I was working with Ellie Golding at the beginning of her career and I met with Rita Ora and Ed Sheeran. I was supposed to produce an album with Ed at one point. Also, Taio Cruz was in my band for 2 years.”

“I am drawn to great voices and it’s exciting working with such young talent.”

What accomplishment are you most proud of?

“I was really proud of composing the Human Planet score I did for the BBC. There are many reasons why. I love what the series represented. It was about human resilience, and what it represented across the world and also about showing the diversity of humans. It was a beautiful series.”

“I had to do 400 separates pieces of music and orchestrate them all for the ‘National Orchestra of Wales’ to play. I was doing 50 minutes of music a week for 8 consecutive weeks running. It nearly killed me. I ended up with pneumonia at the end of it. It was a phenomenal ask and it felt like a mountain but I felt like I managed to climb it. It was the hardest thing I have actually ever done just because it was relentlessly creating music, but it was creating music with an amazing amount of inspiration from all these beautiful images and experiences of human endeavour. I felt really proud of that score.”

Is there anyone you would really like to work with?

“I think Thom Yorke would be number one on my list if I wanted to work with anyone. I just think he is an incredible artist and he has always stayed true to that. He hasn’t compromised at all. He has been really successful but on his own terms. Also I love the guys from massive attack.”

“But then, I also loved working with Mala from Digital Mystikz. We did a track together. So I wouldn’t mind working with him again.”

“I really enjoy working with Anoushka Shankar. Anoushka is a close friend. I’m godfather to her son Zubin and I was present at Pandit Ravi Shankar bedside when he passed away. I was producing her album at the time ‘Traces Of You’ in San Diego.”

“We wrote a track together called Fathers from the album, because my dad passed away a few months afterwards, the both of us were trying to deal with all of the grief we were feeling. So there was a kind of synergy that came out of what we were feeling at the time.”

“She’s an amazing person. She really does her father proud because she’s a brilliant sitar player and she has incredible technique and knowledge of classical music. I also knew her husband, Joe Wright, before they married. I had worked with him. Joe is director of Atonement and some of the biggest films in the world, Pan being more recently. So it’s nice knowing them as a couple now.”

“I have been lucky that I have worked with a lot of the people I really wanted to work with.”

You are constantly busy. What is an average day?

“I don’t have one. I only get about 4-5 hours sleep. I get excited about the day. I have always been like that. That whole concept of seize the day, is quite a big thing for me. Not being a nut about it, but I think it is important to actually enjoy the moments you have, and I always recognise that I am really privileged with what I do. I have an incredibly blessed life and I recognise that.”

“What worries me is the amount of bullshit that is out there being bombarded to people everyday. There is an incredible amount of lying that is going on; and distorting of facts. Unfortunately people accept it. Also, what worries me is Islamophobia, and seeing junior doctors having to go on strike, yet more money is being spent on bombs. If they could spend just a fraction of what they spend on bombs, it would actually save the NHS.”

“I feel surprised that we are in a so-called democracy yet everything is so carefully orchestrated in terms of information received and how much power or little power people have.”

“Everyone should be able to speak out but dissent has become stigmatised. I was one of the people that marched against the war in Iraq. There was 1 million people maybe more, and Blair just went ahead and did exactly what he intended to do without even caring. Then the next time there was a protest there was only a hundred thousand, because people felt disillusioned.”

“You have to recognise reality to change it and I think how you go about changing it, starts with education and awareness.”

“It sounds like I’m going off on a rant in regards to the state of the world but I find it disgusting. It is George Orwell’s vision in a way. His dystopian perspective and that is partially why I called this album, Dystopian Dream, as I feel that we are living it to some degree.”

Special thanks to Nitin Sawhney  for his interview with Public Description.