“I’m loving it right now, and it feels very much like the right time for me.”

Timing is not always my strong point unfortunately, but when meeting a former male model and TV presenter they are bound to be all too familiar with fashionably late. Least I hoped. I met Malcolm Jeffries at his local pub which I had suggested, and immediately apologised for keeping him waiting. Malcolm is still very much the heartthrob I remember from my teen days. So feeling flustered, I offered him a drink, which he declined. He doesn’t drink. I started the interview off well. Late and had set up our interview in a noisy pub.Thankfully, the rest of the interview went much more smoothly. Phew.

If you remember ‘Just Seventeen’ then you almost certainly remember Malcolm Jeffries. When I was growing up and looking for escapism from homework and nagging parents, ‘Just Seventeen’ was the magazine I’d rush to the newsagents for every Wednesday. Especially if I thought Malcolm could be gracing the front cover. Which to my happiness, most often he was. So getting to meet my first ‘celebrity crush’ felt like being an awkward teen again.

Just Seventeen catapulted Malcolm to fame and was the stepping stone into TV presenting. He travelled the world. Hung out with the beautiful and cool, and led a life most of us only dream of, and all from a very young age. Including going on bended knee to propose to Kylie Minogue during an interview, to modelling in Arizona with a young Angelina Jolie. Yet when we discussed his early pin-up days, he remained modest, and even embarrassed at the career opportunities he had landed. I reassured him he made a lot of teenage fans (especially me) very happy back then, to which he found amusing.

How did it start?

“I was 17 years old, working as a runner in the post room for the advertising agency Ogilvy & Mather. I was quite happy go lucky with aspirations of becoming a copywriter. I was in the lift one day, taking post around, as was my job, and about one hour later I got a call from my boss saying they wanted to see me on the creative floor. I’m thinking what have I done wrong. But what transpired was that when I was in the lift there was a commercial director in there at the same time who was casting for a commercial.

He had seen all the models that came up for the casting but questioned ‘I saw this guy in the lift, where is he?’

After describing to the team about the guy he’d seen, they realised he was talking about me.”

“I then got a call to go for a casting and I got the job. It was a Bovril commercial with Jerry Hall. It was a really good experience.The shoot was fun, and I liked the environment immediately.

The commercial was directed by Marek Kanievska, who also directed Less than Zero in 1987. Jerry played the pampered woman who has got everything, I presented her with a red cushion carrying a beautiful pair of Manolah Blahnik shoes but it’s dismissed for a cup of Bovril instead!

Amazingly, I earned more in that three day shoot than I did in the whole year. So I got an agent and it all started from there.”

Reproduced with kind permission of Unilever PLC and group companies.

From then on, Malcolm was catapulted to instant fame with a string of magazine covers behind him. Malcolm even got the opportunity to live in Tokyo for 8 months doing modelling assignments.

“I had just lost a really good friend of mine to AIDS. Ian Charleson, star of Chariots of Fire”

Ian who is also well known for his portrayal of Rev. Charlie Andrews in the 1982 Oscar-winning film Gandhi. Ian was diagnosed with HIV in 1986, and died in 1990.

“I was meant to fly to Tokyo that weekend, but wanted to stay for the funeral. So I cancelled my flight, and got a flight to go up to Scotland for Ian’s funeral.

The next weekend I flew out to Tokyo, emotionally a bit raw, and if you go to Milan, Paris you can still get around but Tokyo felt like a big step to take. I was so panicked as you cannot even read street signs. I felt scared and almost ready to get back on the plane.

I went to help desk for taxi to where I needed to go and a lady directed me in perfect English, so I immediately relaxed and had the best experience. ”

Malcolm also modelled under the name ‘Cassius’. This was used for fashion modelling assignments. His agent Annette Russell, owner of modelling agency So Dam Tuff had recommended this as he had become more synonymous with teen magazines and felt this would help him more with fashion bookings. Ironically ‘Mizz Magazine’, a rival of ‘Just Seventeen’ started booking Cassius as he wasn’t Malcolm seemingly unaware these were not two different people.

Upsettingly for both Malcolm and Annette, they lost many friends and colleagues to the Marchioness disaster which happened in the early hours of 20 August 1989. Annette, is one of only 80 survivors.

Malcolm was in LA at the time when he was woken early in the morning with a phone call from a friend and told the news. His agency re-launch party on a pleasure boat on the Thames had been struck by another boat. Malcolm had only been in LA for a week at the beginning of a year long stint at the time. “I was only 20 years old and I remember feeling so alone and helpless as the news came in over the next few hours that so many friends of mine had died. But, happily, so many also survived.” 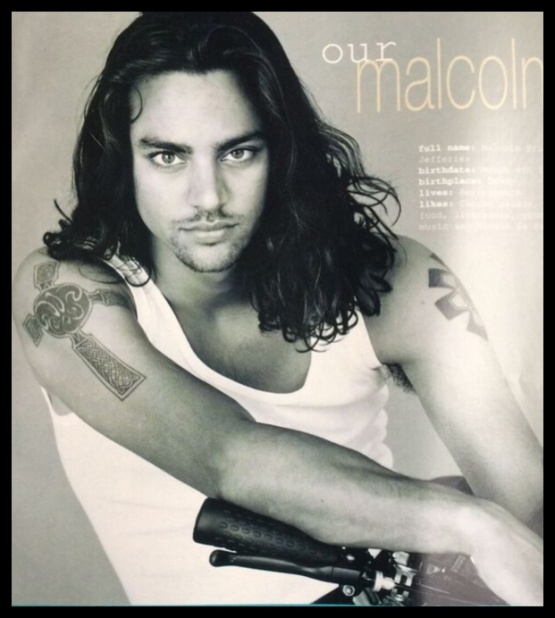 “I feel I have been incredibly lucky with my career.”

On the back of the success of ‘Just Seventeen’, Malcolm then moved onto TV presenting.

“One of the commissioning editors at ITV, were casting for a new Saturday morning programme in London, and asked his teenage daughter at the time ‘who is popular?’ As I already had a fan base, it was much easier for them to try and flag this. I went for a couple of meetings and a casting. I wasn’t nervous and felt natural performing.” but adds “Though I did used to have a problem learning my lines” he laughs.

The TV programme was, Scratchy and Co. Which was a CITV Saturday Morning show with a difference. Hosted by a character called Scratchy, played by Mark Speight as a crazy cartoon character come to life. Malcolm presented in the segment Massive! opposite Denise Van Outen, which was aimed at a slightly older audience.  The show aimed and succeeded to deliver a mix of good music, and showbiz news.

The BAFTA nominated show regularly beat rival show, BBC’s Live & Kicking, presented by Zoë Ball and Jamie Theakston. Massive! even boasted of being the first show to interview The Spice Girls with Denise Van Outen conducting the interview in a hot air balloon.

Though the rivalry was just pretend as Malcolm was really firm friends with both Jamie and Zoë.

Even confessing to a crush on Zoë Ball, “She knew I always had a massive crush, but we used to just laugh about it. I think she also maybe thought I was joking. I remember us being invited to the same private press screening for ‘Romeo & Juliet’ starring Leonardo DiCaprio. So Zoë and I went along together and I said she was my date” laughs Malcolm. “I was so wowed as she had a little weep during the film and sort of wept on my shoulder. I think sadly a missed opportunity” he says humorously. 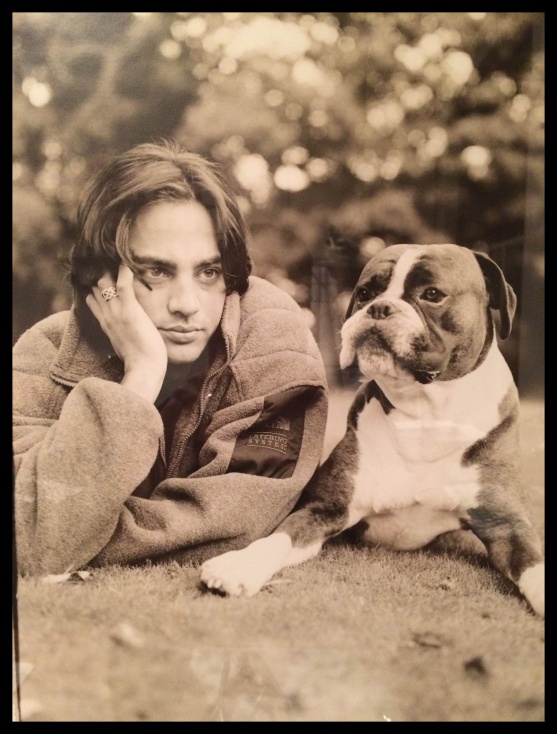 It is much easier to go through what Malcolm hasn’t done or even who he hasn’t met and interviewed but here are a few of Malcolm’s most memorable moments in his career.

Hearing Malcolm recall all the amazing highlights in his career it is easy to assume he has had it very easy. But this year in particular has proved to be testing. Malcolm had a cancer scare, which thankfully turned out to be benign, but tragically Malcolm faced this worry at the same time that his 86 year old adoptive mum had also been diagnosed with cancer. He was told she would have six months to live, but two weeks later she passed away.

“My mum was of the generation, where she would say ‘I don’t want to bother anyone.’ She was more worried about me, as I had just been given a scare and would say ‘we can be chemo buddies.’

Two weeks later she passed away, in a way it was a release as she was very scared. My sister and I fought hard to get her home. We were fortunate to get to say our goodbyes. Losing mum, has brought me and my sister closer, and mum would be proud of that.”

A few months later Malcolm needed surgery himself, for a hip replacement caused after a training accident some years beforehand where he had fractured his hip.  But up and walking the same day, Malcolm has soon got back to his best and is back participating with his other passion as a racing cyclist.

So what is next?

Malcolm has been studying acting, and is now preparing for his upcoming role in ‘Social Notwork’. Written by Sharon Tracy Wright. Directed by Adam Wollerton.

“One of the big dreams, and passions in my life is acting and it is something I realised last year. It has always been something Ive wanted to do and feel its never too late. The fact that I know how to perform, and I don’t have problems with my lines anymore helps.”  “Rehersing,  and the workshopping make me feel alive.”

“After a varied career, I would now love to finish school and become an actor, it is not essential but it feels like the right time for me.”

Special thanks to Malcolm Jeffries for his interview with Public Description.