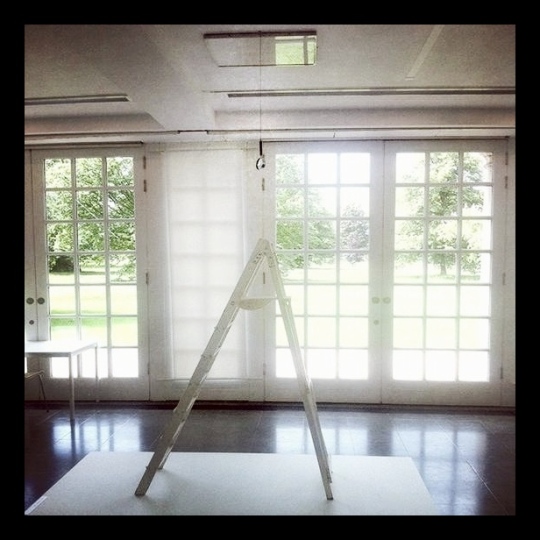 Excerpt from interview with John Lennon: “It was in 1966 in England. I’d been told about this “event” – this Japanese avant-garde artist coming from America. I was looking around the gallery and I saw this ladder and climbed up and got a look in this spyglass on the top of the ladder and it just said ‘YES’. Now, at the time, all the avant-garde was ‘smash the piano with a hammer’ and ‘break the sculpture’ and anti, anti, anti, anti, anti.

It was all boring, negative crap, you know. And just that ‘YES’ made me stay in a gallery full of apples and nails. There was a sign that said, Hammer A Nail In, so I said, “can I hammer a nail in?” But Yoko said no, because the show wasn’t opening until the next day. But the owner came up and whispered to her, “Let him hammer a nail in. You know, he’s a millionaire. He might buy it.” And so there was this little conference, and finally she said, “OK, you can hammer a nail in for five shillings.” So smart-ass says, “Well, I’ll give you an imaginary five shillings and hammer an imaginary nail in.” And that’s when we really met. That’s when we locked eyes and she got it and I got it and, as they say in all the interviews we do, the rest is history.”