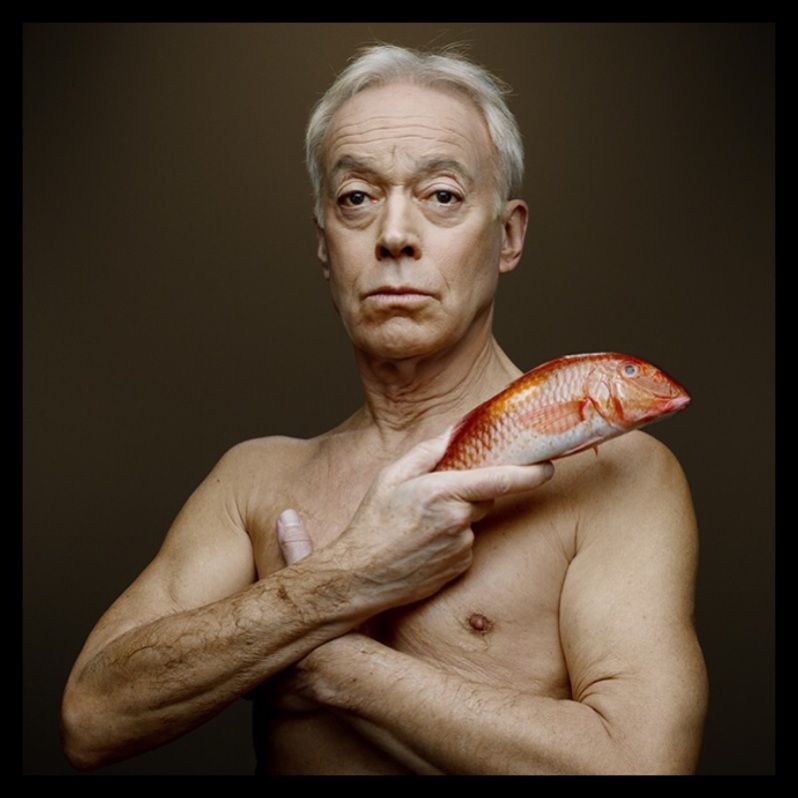 Nickolas Grace  for the campaign, Fishlove

The final instalment of the exclusive Nickolas Grace interview. The interview which was conducted on two separate occasions over coffee in Notting Hill revealed to me a warm, funny, and sincere individual. One that also has an undeniable talent. I would like to thank Nickolas for his time and hope you all enjoy reading the final part of the series.

Any Advice?
“Don’t do it. Haha! We are in a very strange time. Things have changed a lot. Young people in reality shows think ‘Ah I’m famous now, it is easy to get into’. But it’s not easy to sustain.”

“What saddens me is they think they don’t need to go to drama school or they don’t need to study. I always say go to drama school if they are serious about it. There are many many more people now that come in for lots of different reasons. Our union, Equity, is now weak because you don’t have to be part of the union. Anyone can act. Anyone can employ anyone. When I have the chance to employ people as a director I always say I’m only going to employ people who are members of Equity.

“So I’d say don’t do it unless you want to study hard and want to go to drama school.”

“I am very fortunate I have been given two honorary degrees. I’m a Fellow of the Royal Central School, and a Companion of LIPA. I received one from Terence Stamp and one from Sir Paul McCartney.”

“Central had asked me who I would like to present me with my honorary degree. As Alan Bates and Terence Stamp were my two mentors. I asked Alan Bates to present my degree. Sadly, Alan Bates was just beginning to be ill, and said ‘I don’t think I can do it but I’ll be there’. He came in a wheelchair bless him and sat at the back of the hall. So Terence was kind enough to present me with my degree , and it was quite funny: my best mate giving me my honorary degree. That made me cry too. At least my mum was there, and it made her quite proud.”

Amazing Moments
“I have indeed. Who’d have thought I’d work with Madonna in Evita. Alan Parker who is one if my favourite directors wanted me to be in the film. “

Madonna… Sugar or Spice?
“A nightmare. Haha! She’s a great star. The first time we met was amusing. She was tired and it was the last day of shooting. Madonna had done a twelve week shoot for Evita all over Europe and Argentina too. So I go there at 6:30am, to go to make up and costume. I’m sitting in the dressing room to start and there’s a knock on the door and it’s Jonathan Pryce who I’ve known for a long time. He says ‘Listen Nick we’ve done twelve weeks so don’t fuck it up alright’. So I say ‘oh thank you’ haha. No pressure.”

“So I think I’ll be on in a minute. It’s now 9:30am, I have a cup of coffee and she’s not ready so I go back to the room and then there’s another knock at the door and it’s Antonio Banderas who I’d met once before in Spain, when I played Lorca. He says ‘Nickolas remember do not fuck up this movie’ I thought this is obviously a wind up. Haha. So it gets to lunch time and Alan Parker says ‘I’m really sorry there has been a bit of a problem, you go and have some lunch’. So by now I’m quite tense. So I go to get some lunch come back and then Alan says ‘come down I’ll show you the set’, so we go and look at the big set at Pinewood studios. Then suddenly there is a temperature change in the studio. I can feel it. I see Alan strain a little, and you see these two bodyguards come in. I think to myself she’s coming. She walks in and Alan Parker says ‘Oh M, this is my mate Nick, Nickolas Grace, this is Madonna’ she snaps back ‘Don’t touch my fucking hair!’

“I’m like ‘No of course I’m not going to touch your fucking hair’. So that was my first line from Madonna. I think back now, and at the time I was thinking inside I really mustn’t do anything wrong. You can imagine how the day proceeded, but by the end she changed her attitude. She said ‘I really like you’, and made the sign of the cross on my face. ‘I said is that the Madonna blessing?’ and she smiled mischievously.

“You’ll get the full version in my auto-biography. It probably won’t come out until I’m in my 80’s because I want to tell the truth.”

To find out more and read why Nickolas is naked holding a fish please see below link: